Perhaps you remember this band who became famous after their songs were played during the height of Grey's Anatomy popularity. Well they finally came out with a new single and after listening to it a few times, I finally love it. Give it a listen.

I will now be a regular on another freakin social networking tool...Twitter.

Feel free to follow my sweet tweets on the side of my blog or follow me on the site itself.

If you twitter, feel free to leave your twitter page in the comments.
Posted by JBGBC at 11:28 AM 3 comments:

First Round of G20 Pics

Let the games and chaos begin...

There are reports that protesters have chained themselves together on the subway tracks downtown halting all trains from operating. Also, a group called Greenpeace have rappelled off of one of our many bridges with a 90 ft banner. See pics below. 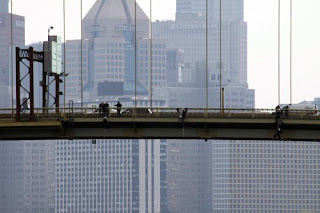 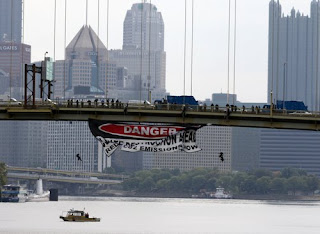 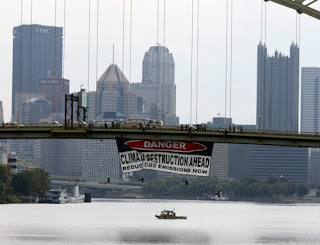 The G-20 Summit has almost arrived here in Pittsburgh. The event that has had the residents of Pittsburgh attention for the past several months is one day away. The protesters have already arrived and have been setting up camps around the city waiting for their important moment when they can express their opinions and have their voices heard.

The G-20 should really be a great thing. To have leaders from around the world come together to discuss issues that effect our world SHOULD be something that people praise. And many do. However, it is when the unruly and in many cases uneducated protesters come here and create chaos and havoc amongst the host city and that is their main purpose. You do not get your voice heard when throwing bricks through a skyscrapers windows or rioting against the police. This is not the way to create change. When this happens, it merely demeans everything you are attempting to do in the first place. You take the attention off the cause and direct it to the violence.

Personally, up until this week, I havent done much research on previous G-20s. I assumed everyone was going a little overboard with the 5000 or so cops that will be descending into our city to protect it from unruly protesters. However after viewing pictures here from the previous G-20, I am now quite worried.

These pictures are a worst case scenario. They are also scary. One can hope things dont get out of control and everyone can say what they need to say peacefully and go home. Chances are though, that this probably will not happen. Pittsburgh is already seeing its unruly protesters. I can only imagine them getting worse.

Most of Pittsburgh will be completely shut down for the next 3 days. Most workers who work downtown have these days off of work or will be working from home. I will be one of those people who will be parked out on my couch with my laptop doing work watching Ellen on TV. However, because I live only a few blocks from downtown Pittsburgh, I will be walking down there on my lunch break to take pictures of the action. If I get any good shots I will be sure to post them here.

If anyone is interested in keeping updated with the happenings sorrounding the G-20 in Pittsburgh this will be a good place to stay up to date.
Posted by JBGBC at 9:05 AM No comments:

Ill be back to regular blog posting tomorrow. I promise!

Get a load of this. We all know that a good portion of these people who are anti-Obama arent the smartest people, but these are the people who are voicing their opinions afterall. Lets find out what they are shall we...

Wow, work has been kickin my ass so I apologize for not posting anything significant for a while. So lets get right into it.

I may have been a little selfish during this mini vacation by basically making the plans for the group for our days there, however this was my first vacation where I actually got to do what I wanted to do without someone else making the plans for me. There was some grumbling throughout the trip with our wonderful and handsome hostess about going to certain places like the club Pacha, or going to tourist ridden areas such as Times Square, or Central Park, but overall I think he even managed to have a good time when he decided to divert his eyes and fingers from his Blackberry. Well hopefully he at least semi enjoyed himself.

We had only one problem during the trip. It had to do with the show Wicked. You see, I am a Buyer at my job, and one of my suppliers had offered to buy me and my friends tickets to go see the show. He called me a few days before my trip to confirm they were purchased and that everything will be at theater and under my name. However, after arriving and standing in line to pick them up, what I feared most happened. No tickets were there. Not under my name, my suppliers name, neither of our companies names. So basically we were screwed. We were lookin all pretty with no where to go. A queen’s biggest nightmare. But luckily the bar Therapy was right around the corner, so we dipped in for a drink and headed out shortly there afterwards.

Also I have to add that before we went to the Eagle, the bf and I made a pit stop at the Gym Bar where we ran into 2 bears who I had seen on Logo’s Documentary called Bear Run. Since I had just seen it a few days before that I had their faces still engraved in my memory so when I saw them in the bar, we approached them and struck up conversation with Michael and Louie from the movie. They were very gracious and we ended up talking to them for almost an hour. So that sort of made my night. We then had an amazing dinner at a restaurant in Chelsea called The Cafeteria which may have been made famous by Sex and the City.

I wont dive into everything I did as most would be quite boring to relay, but all in all, I left very satisfied and very tired. I danced for a total probably 13 to 14 hours over the course of my trip and I could’ve kept on going if it wasn’t for my friends who just couldn’t seem to keep up. We also walked more than I ever want to remember. I am not a huge walking fan.

I still haven’t even looked at any of the photos that I took during my trip but once I get around to it, I will post them on my Flickr page.
Posted by JBGBC at 2:55 PM 1 comment:

Ive been crazy busy at work since I have got back from NYC so cant say much now. But I had an amazing time there. Pictures and some videos to come. For now I will leave you with my favorite DJ set at the Electric Zoo Festival. Benny Benassi killed it! Here is a sample below. Also a fun song by Deadmau5.

Im packing my bags, cuttin my hairs, and doing laundry tonight, because I leave for NYC tomorrow! I catch my plane at 6 and land in JFK at 8. We still dont know what are plans are going to be exactly during the trip other than we want to go out every night and do the touristy type things. Here is our itinerary so far:

Thursday Night: Possibly go to Cielo, Pacha, or random gay bar.
*Where is a good place to go on a Thursday night?

Friday: Touristy stuff during the day. Then going to see Wicked, then off to another bar.
*Anyone know a good place for a Friday night?

Song of the Second

Well I finally got around to opening my own Flickr account and uploading some of my old photography photos. I will continue to update this with random pictures to give you all something to fill your time. So scroll down and look on the right side of my page and you can see my pics. Lots more will be uploaded as I get around to it. :)
Posted by JBGBC at 8:26 AM 1 comment: 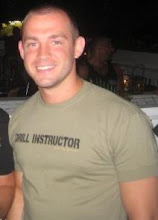